Hello, everyone. This time we inform you about the event about my favorite awesome anime “Hyouka”.

“Hyouka” is a youth group image play of Kyoto Animation Production broadcasted over two courses in 2012.

This anime is originally a nobel by Kadokawa Bunko, written by Honobu Yonezawa.

The author of the cartoon version is Task Ohna.

It appeared as a model in TV anime “Hyouka”

In the story that the hero who was asked to have an umbrella in the heroine of the role of a Ohinasama has a little happening while the festival, the scenery of the actual festival previewed by anime staff members appears in a beautiful depiction.

In the 62nd festival after the anime broadcast, an event inventing Satomi Sato, a voice actor acting as a heroine, was held, and the fellowship between the fans and her deepened.

On the day, a fan event was also held at the same time, events such as limited goods sale and exhibition, quiz tournaments etc. were held there and the venue became a gathering place for fans from all over Japan.

In a corner of the parking lot the painful car the fans are proud gathered.

Also, if we applied, we were able to line up a festival row as a role with an umbrella or with flag.

In this area where spring comes late, Hina Festival is held one month behind.

This festival began in 1954 to incorporate the Hina Festival held in the area where sericulture was originally popular and to pray for the elegance and happiness of women symbolized by silk.

The celebration and queue

In the festive, people who play Gagaku, Shrine maiden with a cup and HIshimochi, nine selected women, and about 100 club members behind them make a line reminiscent of Heian era, about from the Omotesando to the prefecture they walked about 900 meters a way for about 40 minutes while Gagaku is played.

At the end of the festival, introducing the Living Hina and throwing rice cakes for praying for a good harvest for one year were held.

I also like this Living Hina Festive, so I participate in it every year.

Besides the festival, there are some streets where characters of “Hyouka” walk on everyday so I go to Takayama about 3 to 5 times a year.

From here, I will write a report that I experienced during the unseasonal Hina Festival held on April 3 every year.

MEMO
Hina Festival is held on March 3 every year

The weather was bad from the morning on that day, and I was concerned about that for a long time.

The schedule of the festival on that day 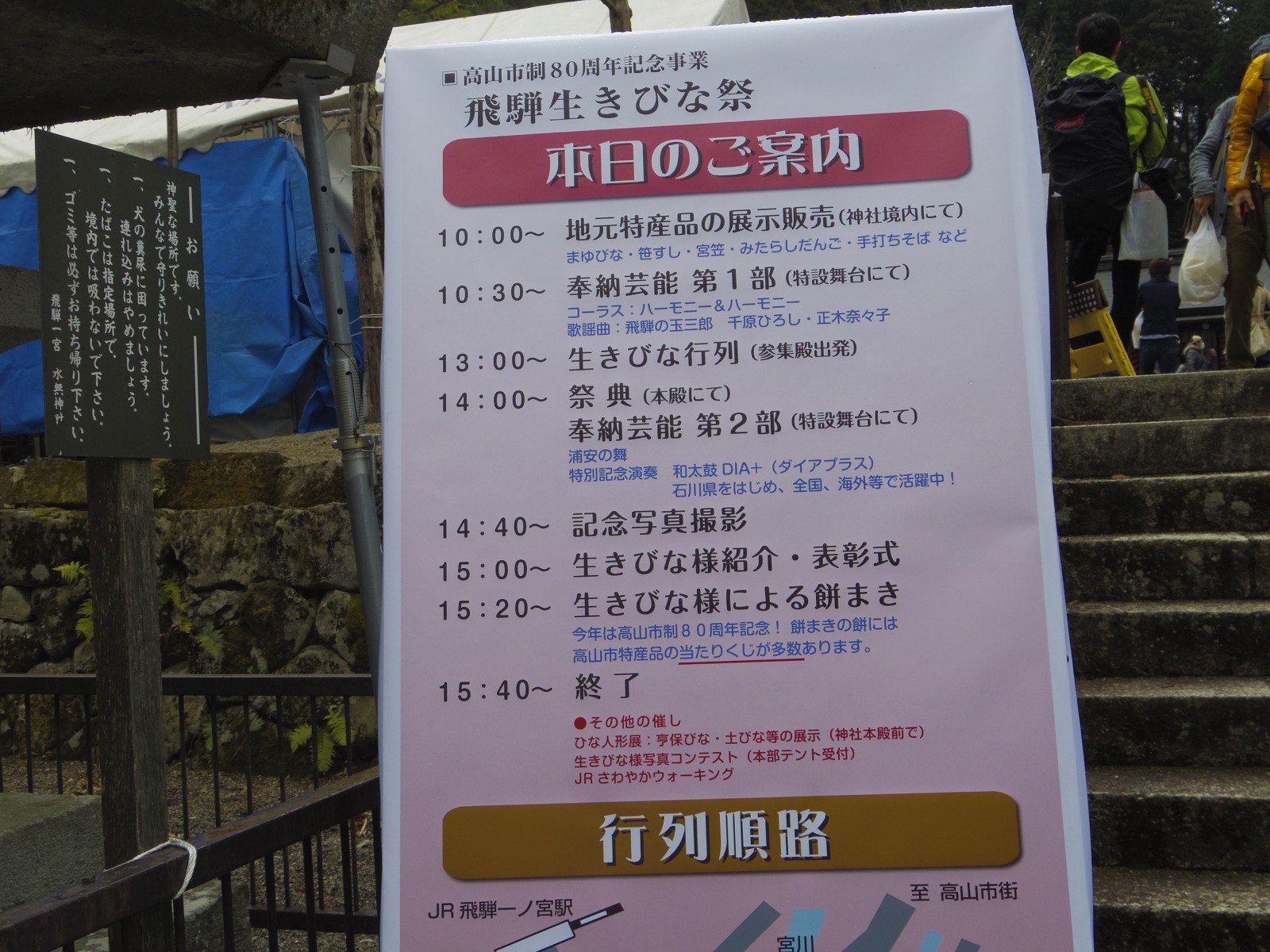 I arrived at the venue at 9 o’clock. 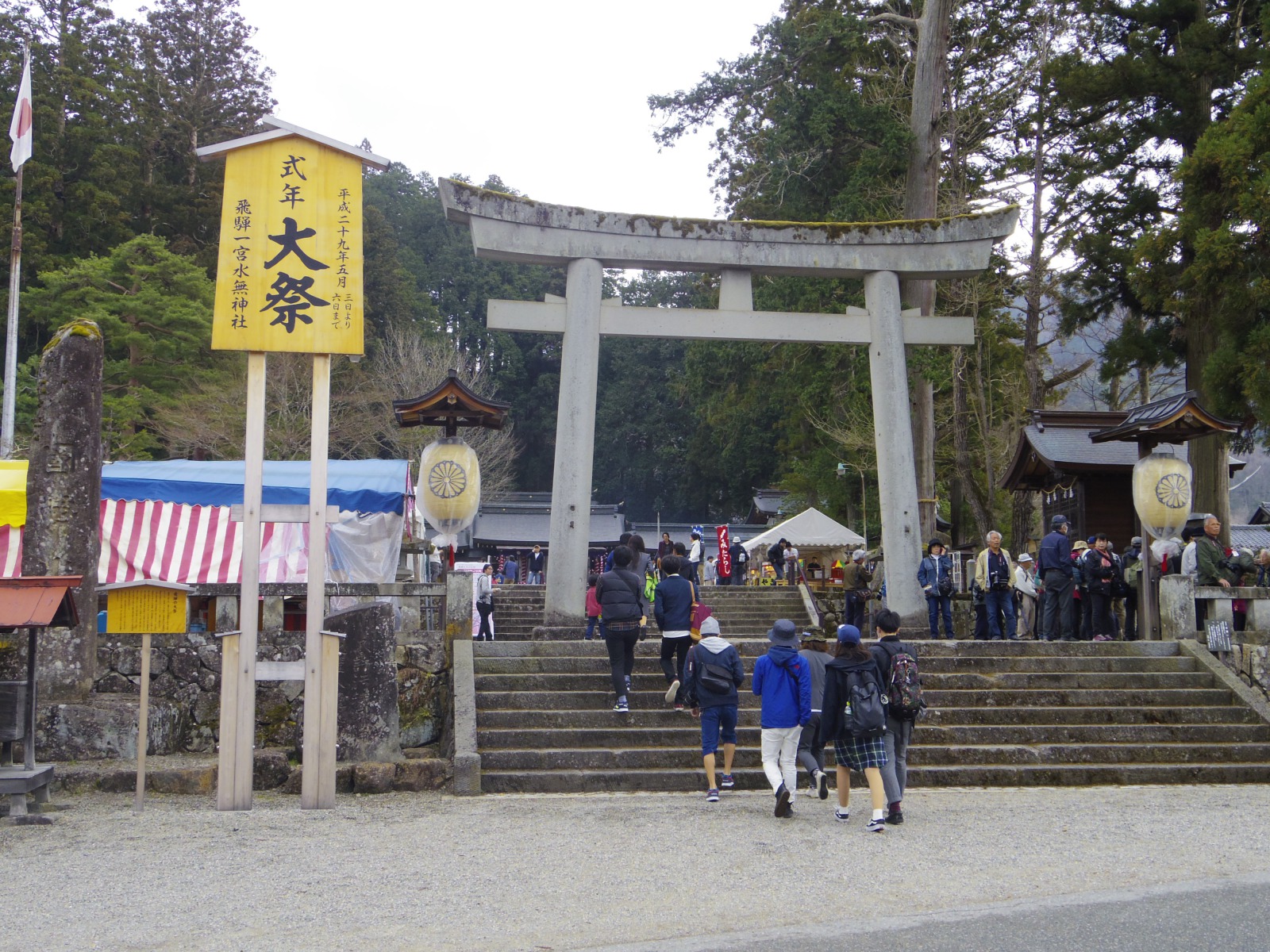 I went to the reproduction original picture exhibition of Task Ohna after that.

The reproduction of the comics of “Hyouka” began at 9：30. 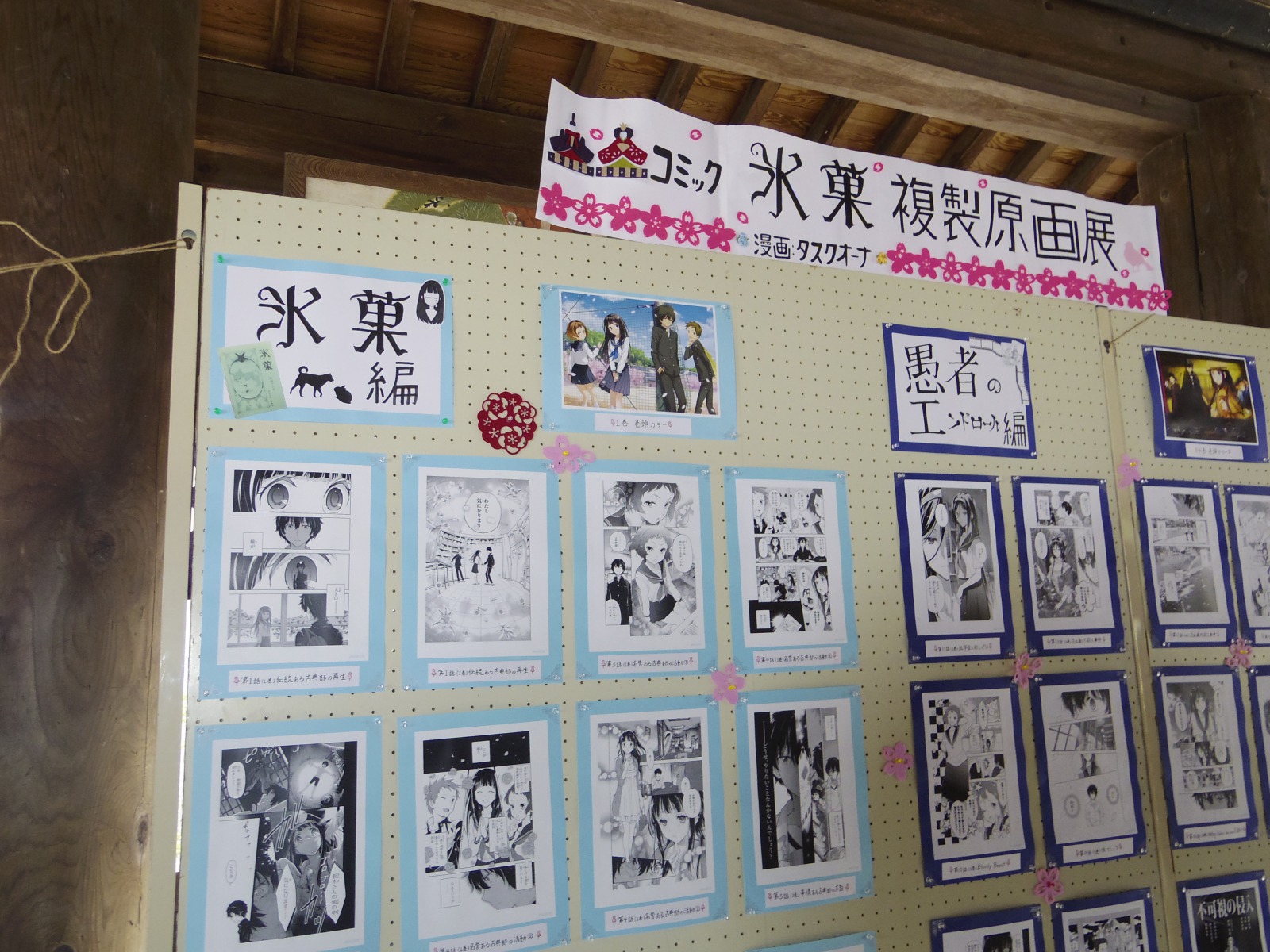 All 47 pieces such as Hyouka part, End rolls of Fools part, Turn of Kudryavka part and so on were displayed. 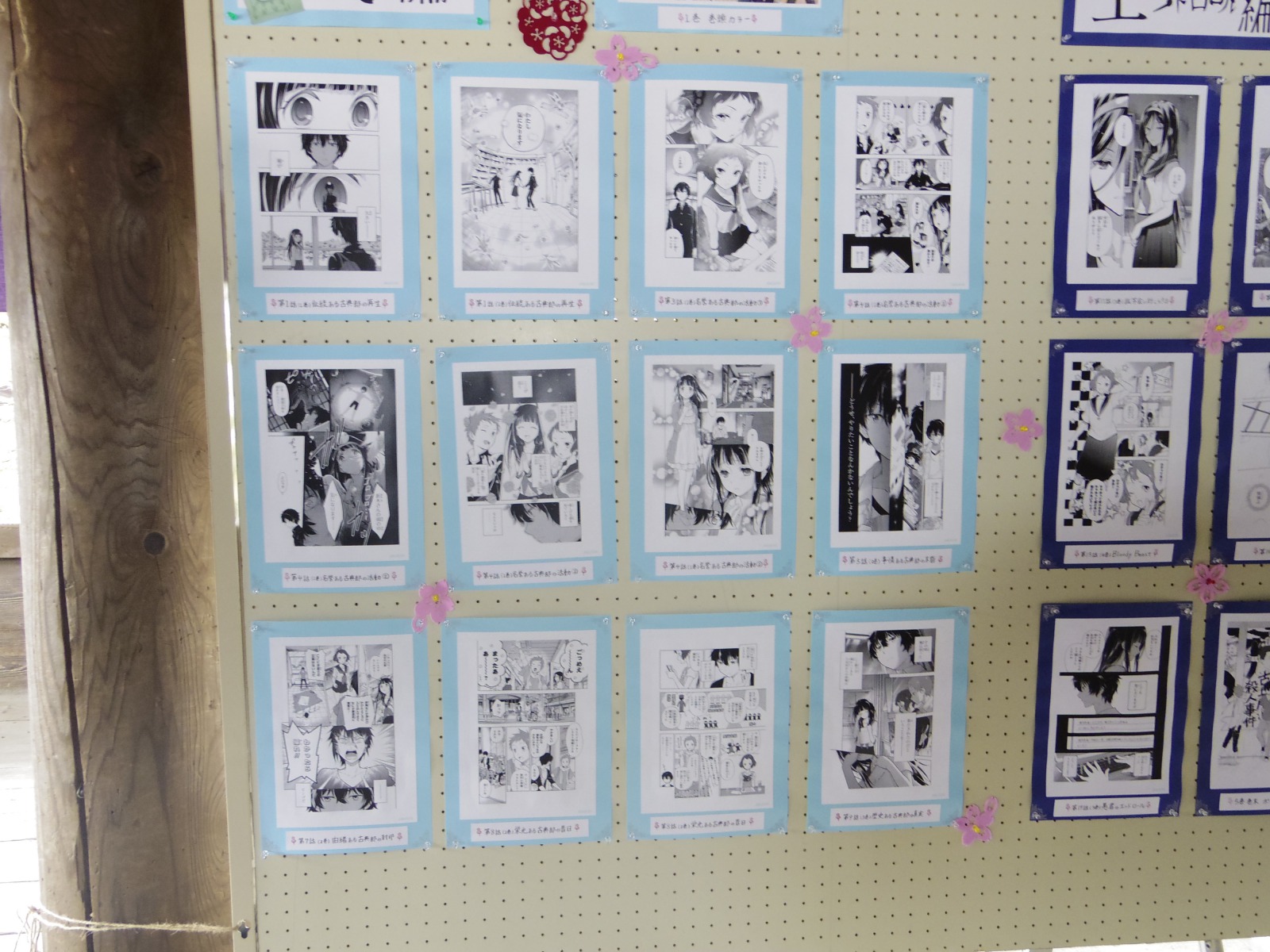 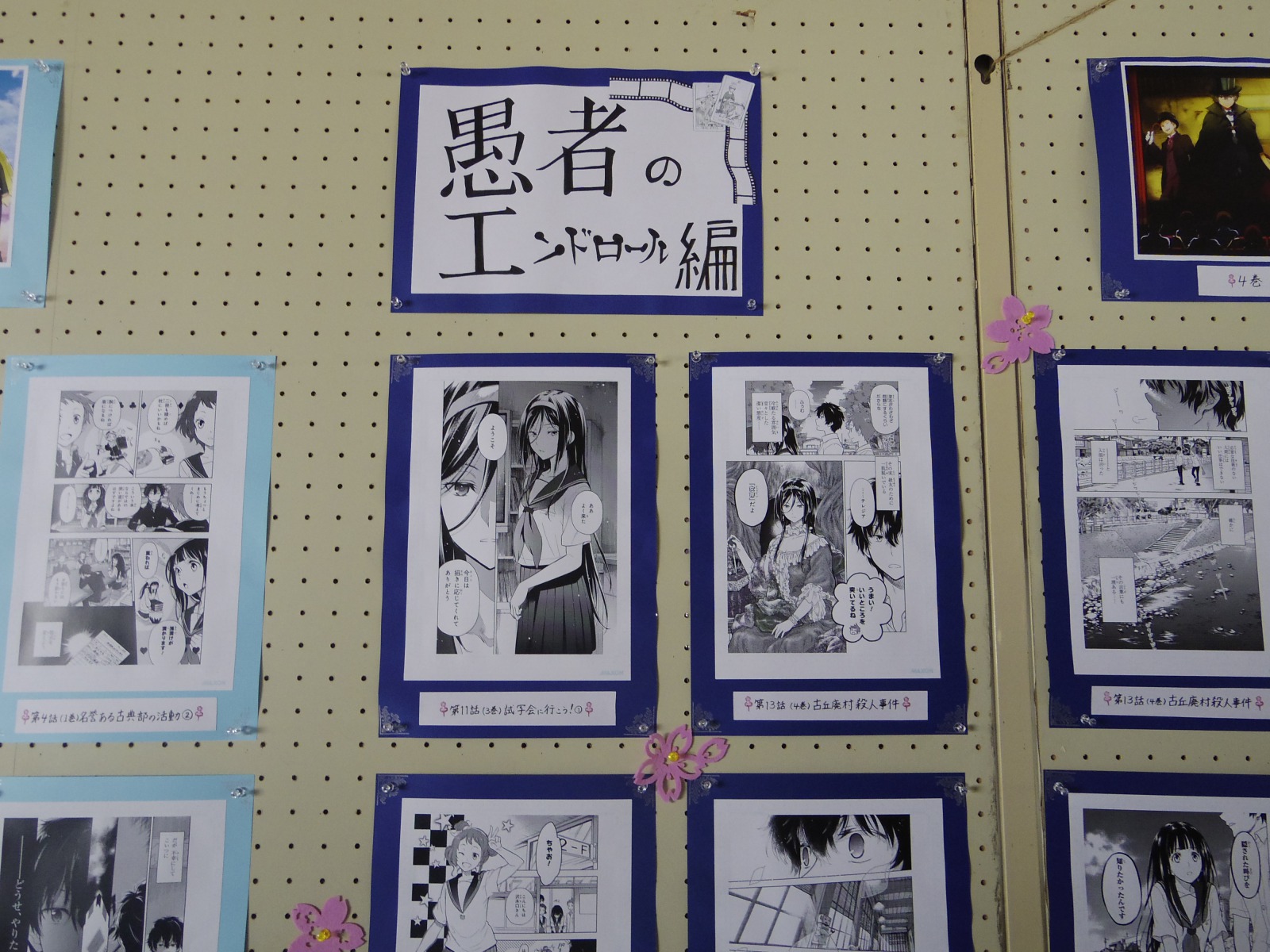 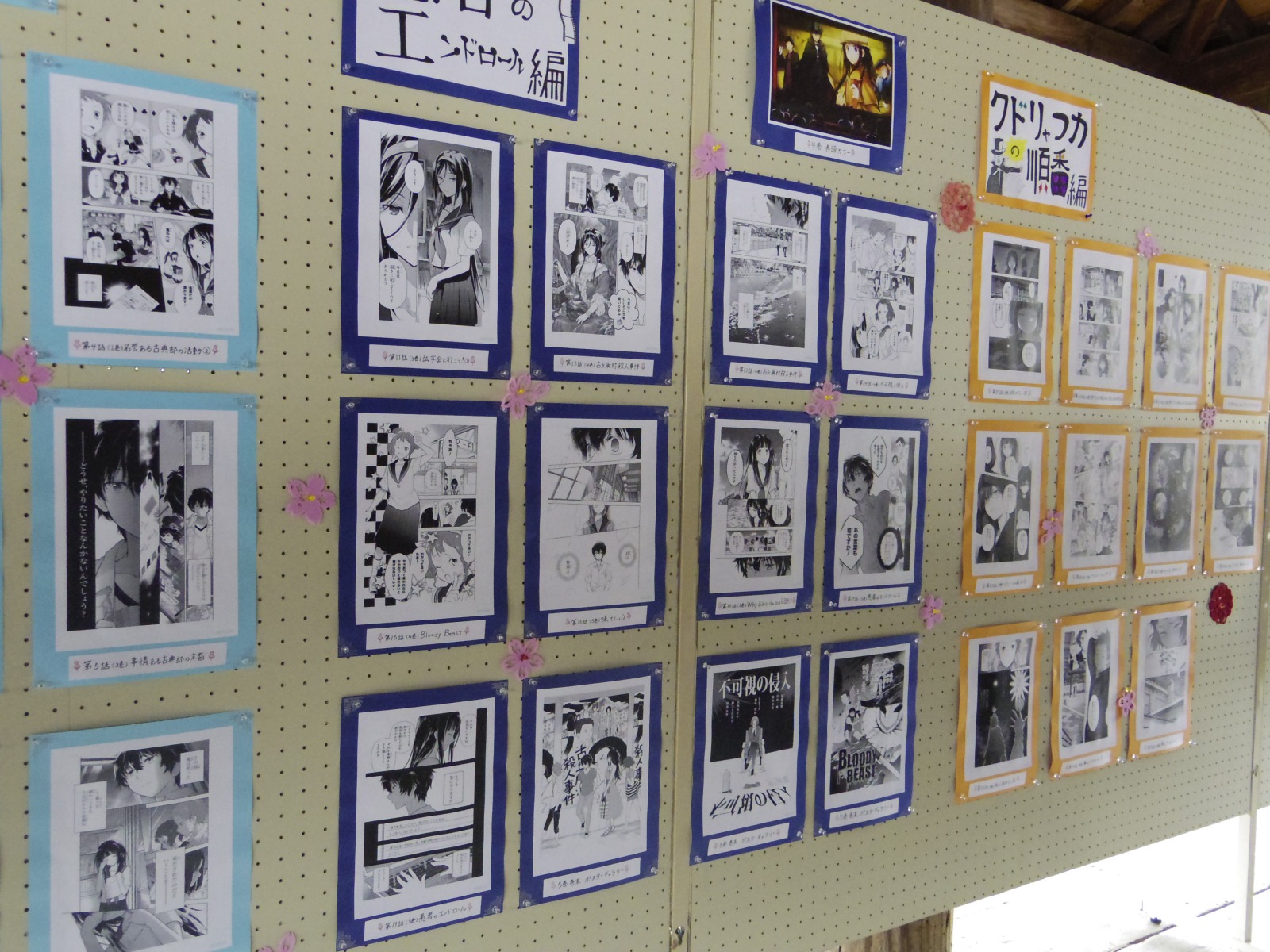 Turn of Kudryavka part, Detouring Hina part and so on 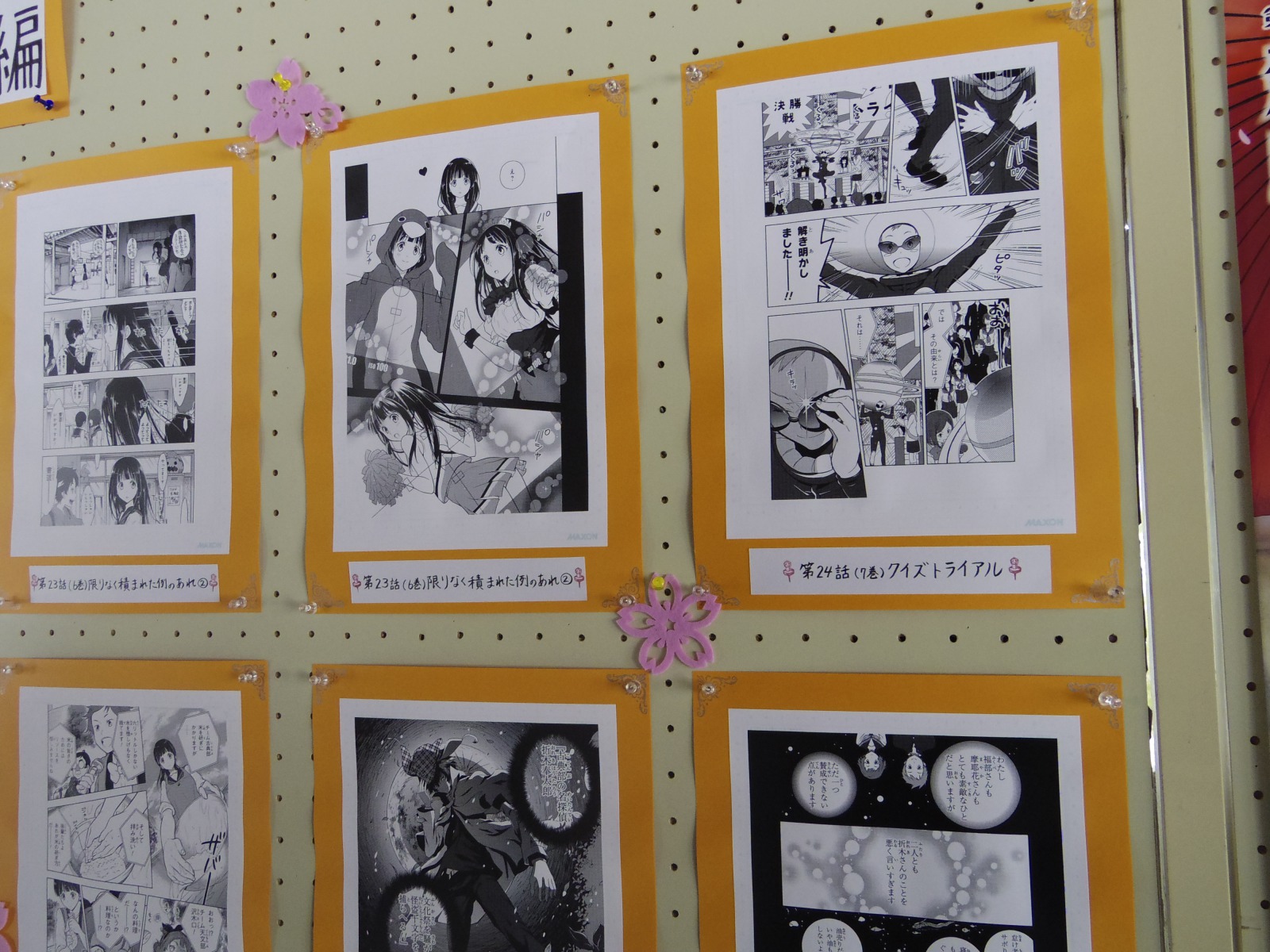 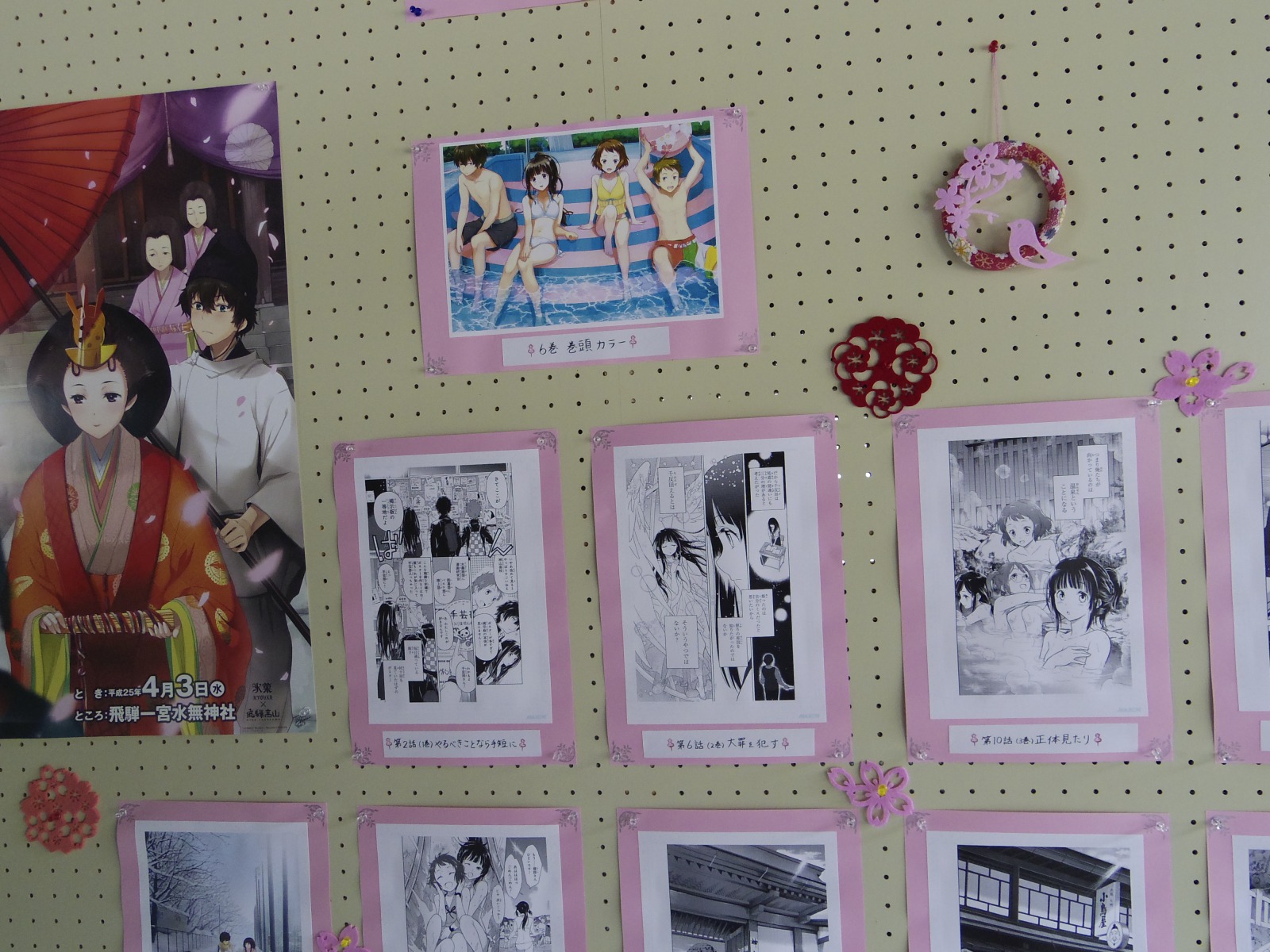 There is an surprise present from Task Ohna. 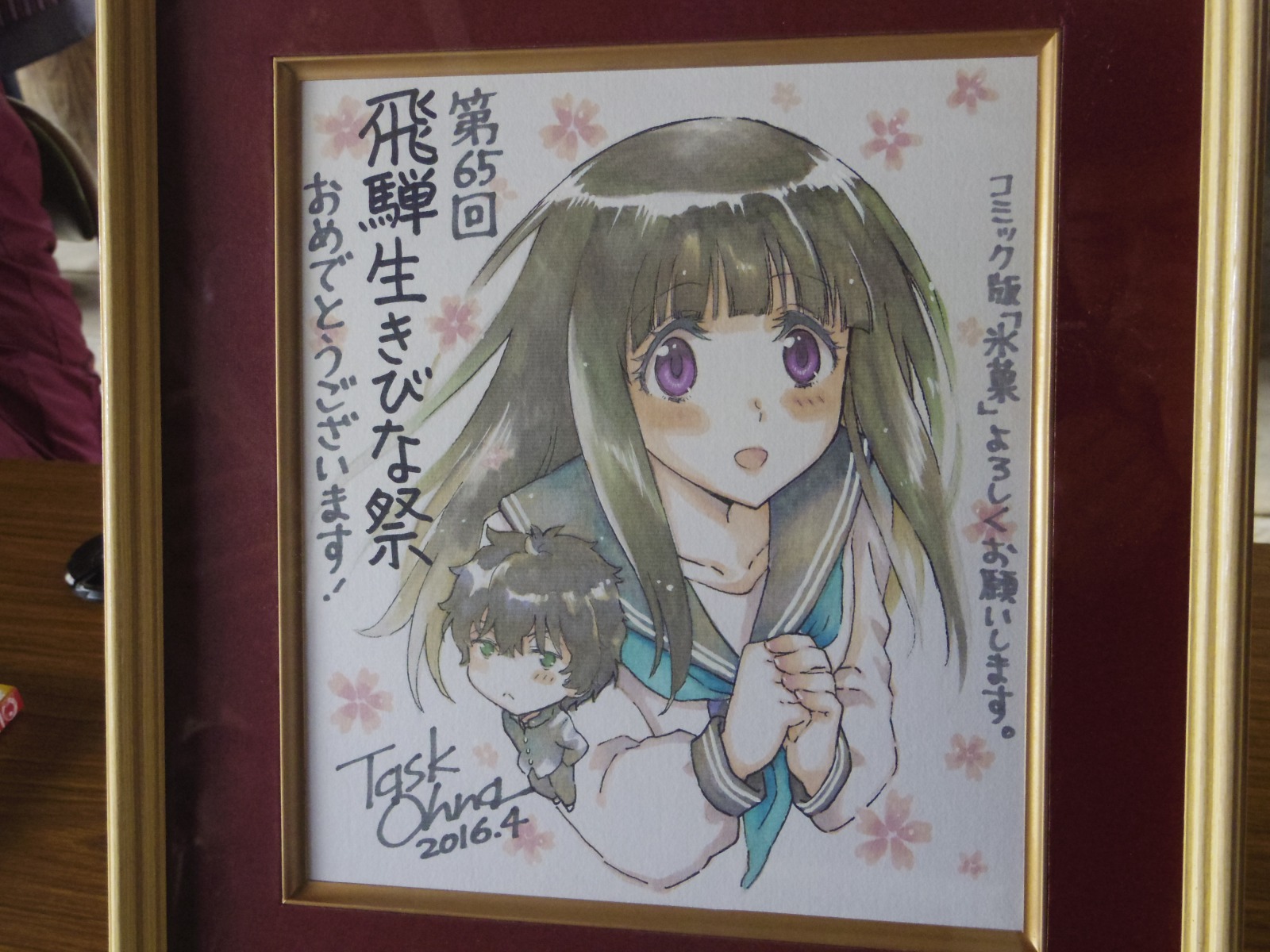 This is a handwritten autograph that can hardly be seen.

He wrote this autograph for this day with a good will.

On this day, I decorated this at the reception desk at the headquarters’ seat.

The fans were really happy to take pictures of it.

There were also a lot of interactive notes. People who participated in the festival wrote pictures and comments on this. 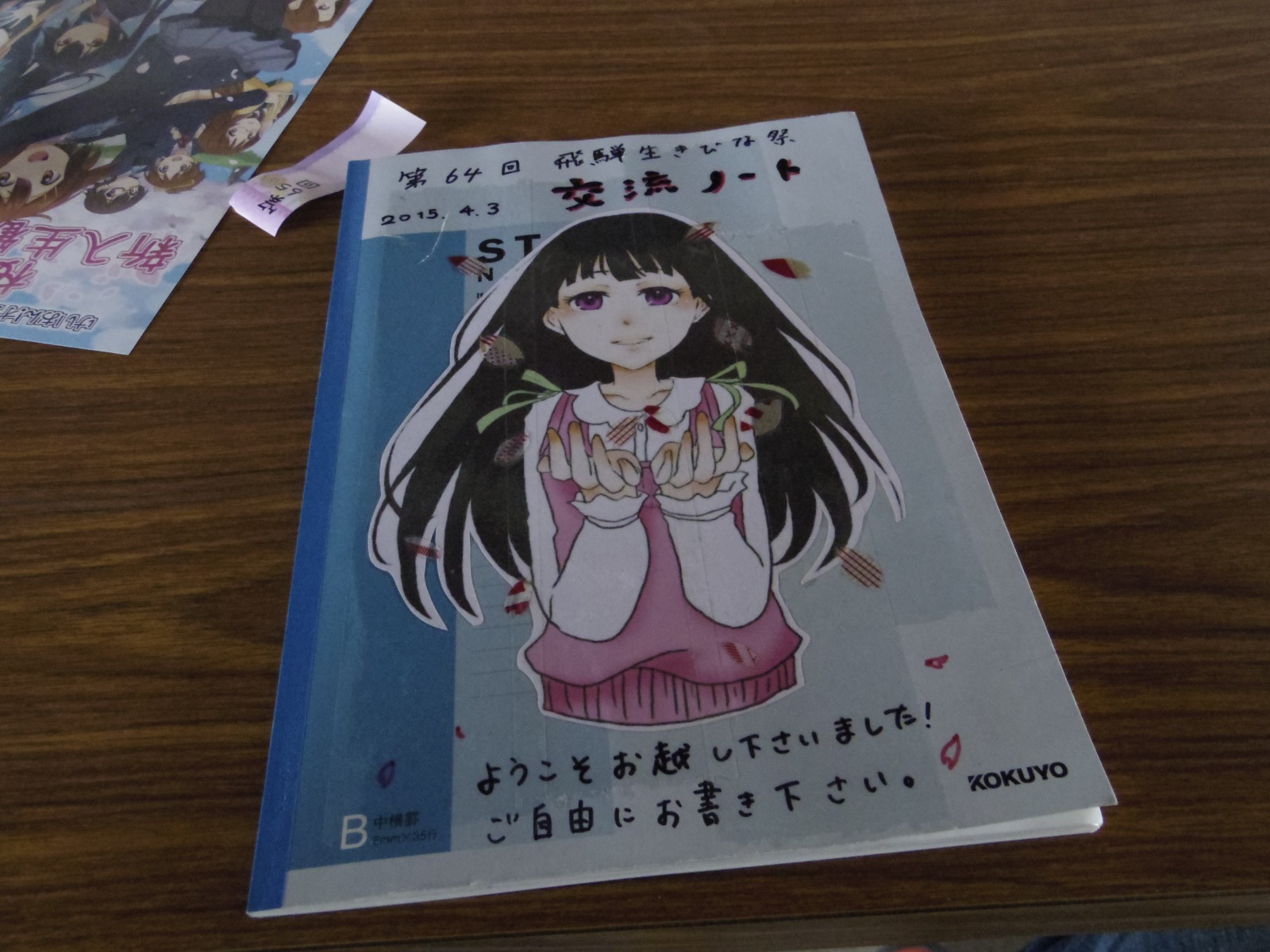 Hello! Would you mind if I share your blog with my facebook group? There’s a lot of folks that I think would really enjoy your content. Please let me know. Thank you

The reply has been delayed. You can share it.

It was decided that two works o…